Manager Confirms The Existence Of The McDonald’s Secret Menu 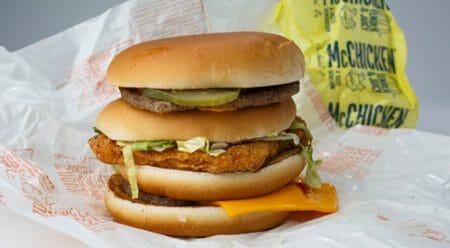 (PCM) Rumors have been circulating for quite some time that like many other fast food chains McDonald’s has its’ very own secret menu and it has now been confirmed by the manager of a franchise in Scotland during a recent Reddit AMA session.

He revealed that customers have the ability to mix and match any ingredients they wish, all they have to do is make the request and by willing to pay the difference for any additional add-ons. He went on to say that the most popular secret menu item, at least in Scotland, is “The Land, Air, and Sea Burger” which as you can imagine is a Big Mac, McChicken and Filet-O-Fish smashed into one sandwich.

The item we found the most humorous is the McGangBang which consists of a McChicken inside of a double cheeseburger! The McDonald’s secret menu was not created by anyone at corporate headquarters. It just consists of the numerous ways that customers can combine various ingredients to create some truly unique sandwich combinations.

The Scottish manager does offer up some final advice before ending his informative AMA saying “Do NOT order the grilled chicken. It’s horrible frozen chicken that we defrost and steam and it’s a bit gelatinous.”  Yuck!

This entry was posted in Advice, Food & Recipes, I Love Food!, Lifestyle, News