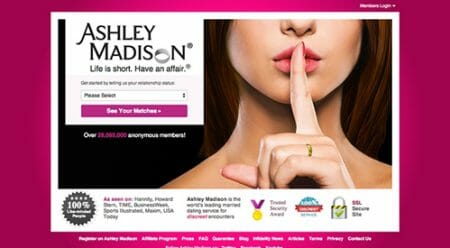 (PCM) A big ‘uh-oh’ goes out to all the cheaters of the world who make up the nearly 37 million members of adult extra-marital/committed relationship affair website AshleyMadison.com. It was revealed that the website has been hacked and those behind the cyber attack are threatening to release the private information of users if the site is not completely shut down.

Ashley Madison is well known for their company slogan which is “Life is short. Have an affair”, however it appears that the hackers are certainly looking to shorten the lifespan of the popular website. Ashley Madison is owned by a Canadian company called Avid Life Media, who claim they were made aware of an attempt by an unauthorized party to gain access to their systems. They go on to say that they have been able to secure all of their sites and close the unauthorized access points and are now working with local authorities in an attempt to discover the group behind the hack.

This is not the first time an adults only website has been compromised. Earlier this year, Adult Friend Finder was hacked and the information for more than 3.5 million users was left exposed. The group behind the Ashley Madison hack claim that they are unhappy with the company’s “full delete” service which promises to fully delete a users entire profile and all associated information for a fee of $19.  The hackers claim that even after users pay the deletion fee their information, including real names and credit information still remain on the website and that the full delete service is a scam.

According to CNN, “If Ashley Madison is not taken offline, they have threatened to ‘release customer records, including profiles with all the customers’ secret sexual fantasies and matching credit card transactions, real names and addresses and employee documents and emails” leaving anyone who has ever used the site at rise of exposure.