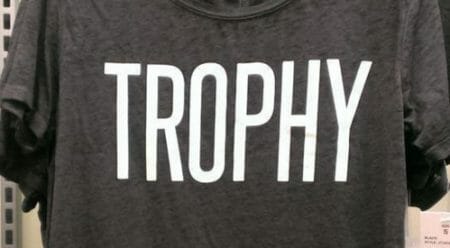 (PCM) A petition calling for the removal of a controversial t-shirt with the word ‘Trophy’ emblazoned on the front from Target stores has been created and has already racked up nearly 15,000 supporters.

The petition claims that the t-shirt in question perpetuates rape culture and that the word ‘trophy’ when used to reference another human being is both objectifying and demeaning. A trophy is an obtainable thing and human beings should not be looked at as such. The petition goes on to say that they feel that Target, being such an influential company, should not be allowed to get away with such irresponsible behavior. They say, “The truth is that millions of women and young girls are taken as ‘trophies’ every year in war, sex trafficking, slavery and rape.”

The t-shirt is part of Target’s engagement and wedding collection and was not created to cause any type of offense. A company spokesperson said that they were created as a fun wink and that they have received an overwhelming positive response from their guests”. Other shirts in the collection have words on them such as “Bride” and “Mrs.”.  It appears that Target has no plans to remove the t-shirt in question anytime soon despite the number of signatures collected on the petition.