My Journey To Health, Dreams 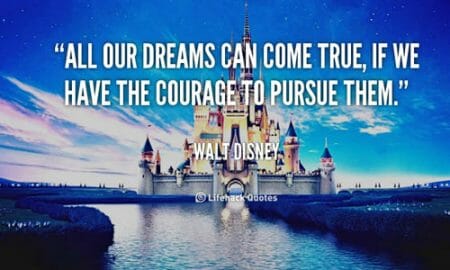 Sometimes the past gets in the way of our dreams, and letting the past remain in the past is something we all have problems doing.  People say things like; “Let it go.” Or “Why does that still matter?” Or “That was a long time ago.”  But, letting something go or believing something doesn’t matter, even if it was a long time ago is impossible.  Some emotional wounds run too deep and some may leave us crippled for life.

One month from today I will turn 55, this is being published on February 17, 2016, I’m not looking forward to it.  I am unhappy with the way my life turned out and wondering how much time I have left to make things right, or even if I can.

We all have dreams when we are young.  I wanted to be an actor, a singer, a writer and a bit later a director.  But there were the negative people in my life, important people that did not believe in me or my dreams.  They also had plans of their own for what I was supposed to become.  They pushed their plans at me and ultimately I failed at everything.

Now I am more than half way through life with only remnants of the things that I wanted.  I did act sing and direct, but on the community level, there is nothing wrong with that, but I still want more.  As a director I was good.  I was able to pass on my vision of a play and that vision was understood, I was also able to incorporate into my vision the visions of the actors that I worked with allowing the whole company the knowledge that the art we produced belonged to us all.

I am not saying that there were no disagreements.  There were. But they were worked through and agreements made.  Knowing that an actor’s idea is better than yours or that yours is better than the actors is wisdom on a director’s journey.

And now I am writing.  You see the fruits of that here as each column is published as well as the 10 or more other stories I write each month.  And I have a children’s book in my computer that is about 25% done that I hope to finish and maybe see published.

So here I am on my journey, working on my health, seeing my weight drop and praying that the emotional issues will one day find a way to settle down.  But I must plan here as well.  I have to find strength to actually continue the novel, to look for chances to work the stage and to deal with fear which can be completely overwhelming.  I have to turn down or ignore the voices in my head that constantly tell me I am not worth anything and what I am passionate about has no meaning.

The truth is, what I care about, does have meaning.  Art literature, theater these are the things which make our human race move forward.  In the 1960s we watched Star Trek and believed that the technology in that show could never happen.  Today we all carry a communicator in our hands that does way more than the ones on Star Trek ever could.  100 years before that Jules Verne took us 20,000 Leagues Under The Sea, it seemed impossible then but it is happening now.  Whatever man can conceive of he can also make happen.  It’s starts with a dream and then becomes work and then reality.  But the dream always comes first.

Many people do not believe in God.  I however do, and I believe we are the reflection of God, God tells us in Genesis that He made us in his own image, both male and female.  God is a creator and so are we.  Saint Irenaeus wrote,  “The glory of God is man fully alive, and the life of man is the vision of God. If the revelation of God through creation already brings life to all living beings on the earth, how much more will the manifestation of the Father by the Word bring life to those who see God”

That is a lot to think about, but to me Irenaeus is saying that we being ourselves in conjunction with Jesus will be more alive as we strive to be who we were created to be.  We were created to be fully alive, not beaten down and told that what we are is wrong.

Today, what I am is not wrong.  It needs to be adjusted and improved but it is not wrong.  A friend told me this week that “God loves us in our unloveliness.”  And that is something that will always be true.  There is no one I need to prove myself to.  Not even God, He doesn’t want to see anything more or less than what He created me to be.  And I bring glory to Him as I become what that is.

This entry was posted in Health & Fitness, Lifestyle, Wellness