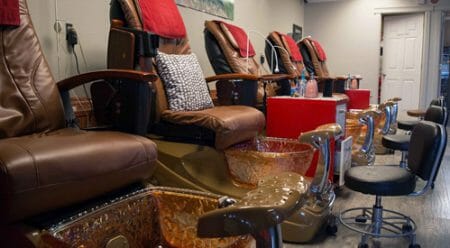 (PCM) A Tennessee nail salon, Rose Nails in Frayser, has found themselves in hot water after a customer posted an image online of a sign hanging in their shop saying that they charge more money for pedicures to overweight customers. The offensive sign in question read, “”Sorry, but if you are overweight, pedicures will be $45 due to service fees for pedicurists. Thank you!”. Customers were understandably outraged and once the image of the sign was posted online the rest of the internet became just as angered.

We just want to know what process the salon plans to use to determine if a customer fits the standard of being overweight or not. How would they even begin to go about figuring that out without literally offending everyone? That’s the biggest mystery. It’s not like you can just go walking up to a potential customer and say ‘Oh, excuse me. You look overweight. Would you mind weighing in before getting in the pedicure chair?”. Umm no way! If a nail salon employee were to ever say such a thing to us, we would be completely and totally offending and take our business elsewhere immediately.

When Memphis area news station WREG stopped by the salon in question the sign had already been removed and the salon owner claims that the sign was never posted up in his establishment. The customer who posted the picture online begs to differ, however we can’t say were blame the salon owner for denying it given all the backlash. The shop owner claims the picture could be from any shop in the area. He also went on to say that he had considered putting up a similar sign, but decided against it, instead he just refuses service to severely overweight customers.

The salon owner told the news station, It’s difficult for technicians to give them pedicures and he’s had broken chairs in the past which it hurts his bottom line. He said he’s had chairs broken twice which has cost him $2,000 to $2,500. Still sounds like a slippery slope to us.