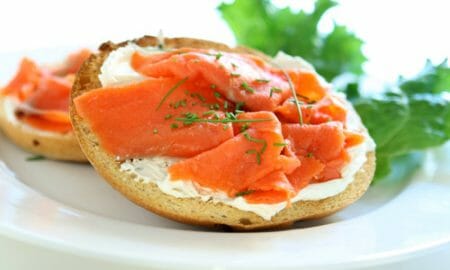 (PCM) The origins of National Bagel Day / National Bagel and Lox Day are unclear, as is an explanation for why the latter became the former in recent years . Why would anyone want to pass over lox?

The origins of bagels and lox are less of a mystery.

The bagel is so much a part of the American breakfast experience you’d think it was invented here; but actually this ring-shaped bread is an import of the Jewish communities of Eastern Europe, made popular in cities with large immigrant populations like New York or Montreal. From the German word for “bracelet” or “bangle”, bagels are distinctive for their taste (slightly sweet, derived from barley-malt) and texture (chewy on the inside with a toasty, often shiny exterior), but most of all for their hole-in-the-middle, which allows for even baking, easy window displays, and fun-time finger twirling.

Traditional bagels often come with baked-on toppings such as onions, poppy or sesame seeds or salt, though there are many other varieties to choose from, both sweet and savory—and plain is perfectly okay too. Great for snacking or sandwiches as well as a breakfast food, favorite bagel toppings include butter, jelly and/or peanut butter, or really anything that gets your taste buds rolling – including, of course, lox and cream cheese.

Lox, or brined salmon, has ancient roots: coastal cultures, notably native Americans and Scandinavian peoples, have long used sea salt to preserve and season their food. Though similar to smoked salmon (also good on bagels) lox is distinct in that it is never cooked, only salt-cured, thus it has a smoother, cleaner texture.

Lox became associated with European Jewish culture in recent centuries, and was brought to the United States by immigrants who, in typical American fashion, fused it with English cream cheese, Mediterranean capers and tomatoes, and the wholesome hole-some bagel. Though an iconic New York treat, bagels and lox are today enjoyed coast to coast, because why should the Big Apple have all the fun?

And now this delicious dish has its own holiday. Or not… I mean, you could just celebrate the bagel. I guess. But that just seems fishy to me.