New Alarm Clock Will Wake You Up With Smell! 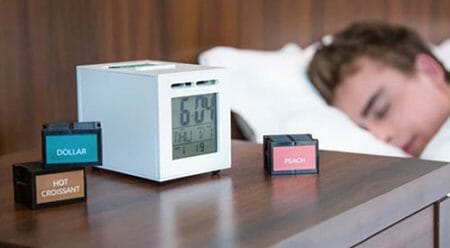 (PCM) With all of the new technology and gadgets that were revealed during this year’s CES show, we truly are beginning to feel that we will soon be living in that fabled futuristic world of “The Jetsons” in the very near future. One product that caught our fancy was the newly unveiled alarm clock that promises to wake users using smell rather than sound.

Could you imagine waking up to the smell of freshly brewed coffee or a hot breakfast cooking every morning? How about fresh flowers or morning dew? That will soon be a reality with the new Sensorwake alarm clock. Rather than emitting a harsh beeping or alarm sound the alarm clock will diffuse an aroma of your choice to get you up an running. So far there are fifteen different scents to choose from and more on the way.

The company won Google’s Science Fair and plans to ship their first consumer ready clock by May of 2016. They hope to have them available in retail stores by November of 2016 in time for the 2016 holiday shopping season and they will be priced at $109.

The clock uses a cartridge similar to those used in plug-in type air fresheners.  Each cartridge lasts for 30 uses and are 100% recyclable. When it is time for the individual to wake up, the scent is diffused from the alarm clock for three minutes. If at the end of three minutes, the individual is not awake then a standard alarm beeping sound will go off as a back-up.

This entry was posted in Health & Fitness, Lifestyle, News