New Children’s Book Has Santa Claus Coming Out Of The Closet, Rather Than To Town 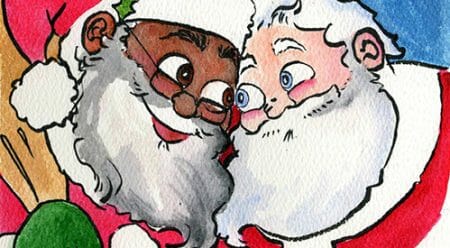 (PCM) A new children’s book will be published that is set to change the story of Santa Claus as we know it, forever! The book titled, “Santa’s Husband” is penned by Daniel Kibblesmith and features the story of a gay, black Santa who lives in the North Pole with his white husband. The story further goes on to explain that if Santa can’t make it out to all of his mall appearances, his husband fills in, hence why everyone believes that Santa is white.

Kibblesmith is also a writer for “The Late Show with Stephen Colbert” and the book “How To Win At Everything”.  He revealed via Twitter that the “Santa’s Husband” book will be hitting store shelves on October 1o, 2017. Kibblesmith says that the idea for the “Santa’s Husband” book came from a joke he tweeted back in December of 2016 which read, “Me & @JenAshleyWright have decided our future child will only know about Black Santa. If they see a white one we’ll say “That’s his husband”

Kibblesmith still appears to be in awe that the story is actually getting published, but definitely seems ready to take on some of the backlash he will most likely begin to receive. He also has a ton of support as well, so we are definitely looking at a Christmas battle to begin online soon. Kibblesmith and publisher Harper Design both claim that “Santa’s Husband” will be a parody children’s book, but it is also meant for all ages.

This entry was posted in Books, Debatable, Lifestyle, News