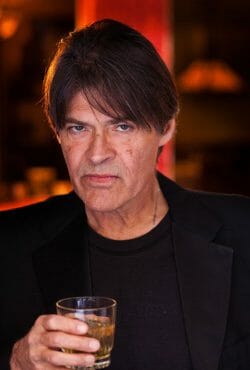 I had the honor of recently interviewing writer Jack Ketchum. Ketchum is a masterful storyteller and has written over twenty novels & novellas. Five of his books have been turned into films The Girl Next Door, The Lost, Red, Offspring, and The Woman.

The Woman and I’m Not Sam were both written with director Lucky Mckee. Be sure to check out www.jackketchum.net for a full listing of his terrifying body of work.

Q: Are writers born or made due to their upbringing or social surroundings?

JACK KETCHUM: I’m no scientist, so I can’t speak for nature. But I do know about nurture. Were it not for my mother teaching me to read pre-kindergarten, encouraging my interest in and love of all kinds of reading — including comic books — I wouldn’t be here today. Then I had some great teachers along the way in high school and college, most notably my sophomore English teacher, Dorothy Senner, who assigned the class to write to a writer and see if they responded. Robert Bloch did, wrote back to me and subsequently encouraged my writing every step of the way until the day he died. A lot of doors opened for me. I owe a lot of good people big time.

Q: You have inspired a lot of writer’s including myself. What advice can you give someone who has a story they want to tell?

JK: Apply ass to chair. Make sure that before you do that you’ve read like a demon, all kinds of stuff. Then, when you think you’re ready, trust yourself and trust the story. And remember to have fun!

Q: Are there any upcoming horror movies that are coming out that you are looking forward to seeing?

JK: I usually don’t know what’s coming until it’s out. I rarely watch previews and never read the trades. Horror movies have always been pretty hit or miss — you wade through a lot of uninspired drek to get to a gem. Fine. I’m good with that. But it also means I don’t get my hopes up prematurely.

Q: You and Lucky Mckee have been quite the successful pairing. How did that relationship come to be?

JK: Lucky wanted to option Red for himself to direct and The Lost for his buddy Chris Sivertson. Once I saw May I was immediately on board. Then we got to know one another, and found that we’re so like-minded in so many ways about movies, books, and life in general that collaboration seemed a natural way to go. Damn glad we did.

Q: Any upcoming projects on the horizon?

JK: I’ve got a new story collection coming out soon called Gorilla In My Room, and the 35th Anniversary edition of Off Season, illustrated, and complete with bells and whistles. After that, I suspect Lucky and I will start a new project before too long.

Q: The first book of yours I read was The Girl Next Door I was both fascinated and horrified. Do you ever go back and read a scene and get goosebumps?

JK: Not goosebumps exactly. But last year I did the audio version of The Girl Next Door, and prior to that I’d never read it out loud. So, there were places where I had to stop myself and say, good grief, I wrote that? Really? That’s really harsh!

Q: You grew up in New Jersey and worked various jobs before writing full time. Do you ever run into childhood friends or coworkers that have read your work?

JK: Happily, there have been a few who’ve found me along the way, including a woman last year who I was absolutely nuts about in college. She went and read everything I wrote in a matter of a few months. And I gotta say, I loved it.

Q: Favorite place to get inspiration?

JK: Lying in bed with my nose in a book.

Q: Do you write every day?

JK: Perish the thought! I’m not driven to write. I take time off for actual life in between projects. Though when I’m doing a longer piece, a book or a screenplay, then I do write something each day, even if it’s only a few paragraphs, just to keep it flowing and hold onto the continuity. Otherwise I’ll lay back for a while and do a short story, essay or poem every now and then. It’s got to be fun for me, the way it was when I first started, or else it becomes a job…and I’m allergic to jobs.

Q: I’ve read that you loved Elvis Presley growing up. If you could have one conversation with him what would you talk about and would you give him any advice?

JK: Well, he’s dead, and I imagine that’s pretty boring, so that might limit our conversation. If I could have talked to him while he was still alive I’d have told him to dump that goddamn pissant manager of his, Colonel Tom Parker — or Uncle Tom to some of us — and strike out on his own. But if I’m talking to his spirit or something? I’d say thank you, for giving a thirteen-year-old who was just plain different a shot of courage.

This entry was posted in Advice, Books, Celebrity, Lifestyle, News