Popcorn May Be Linked to Alzheimer’s Disease 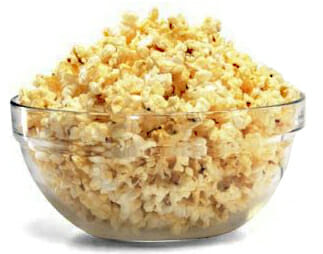 (PCM) As if you didn’t need another reason to avoid movie theater popcorn, now researchers are saying diacetyl, an ingredient in popcorn that gives the butters treat its flavor and smell, may be linked to Alzheimer’s disease.

Diacetyl has recently been the focus of research because it’s been linked to respiratory and other problems in workers at microwave popcorn and food-flavoring factories. It’s also used in margarines, snack foods, pet foods, and even beer and wine, say researchers.

The study published in the journal Chemical Research in Toxicology found diacetyl increased the level of beta-amyloid clumping, which according to researchers is the hallmark of Alzheimer’s disease. According to Robert Vince, director of the Center for Drug Design at the University of Minnesota, other lab experiments have found that diacetyl easily penetrates the “blood-brain barrier,” which is needed to keep many harmful substances from entering the brain.

“In light of the chronic exposure of industry workers to diacetyl, this study raises the troubling possibility of long-term neurological toxicity mediated by diacetyl,” the researchers said in a statement.

Keep it healthy and clean by switching to all natural popcorn. Buy a bag of kernels and pop them yourself in a big pot on the stove with a little olive oil for a delicious, risk-free snack!