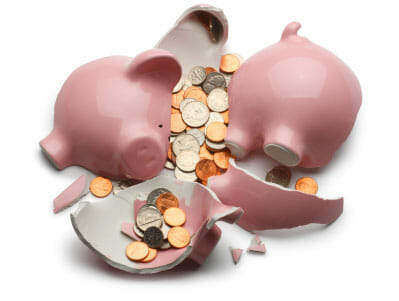 (PCM) My boss recently gave me a book about why 20 or 30-somethings can’t get ahead. (Is he trying to warn me about something?) Either way, I graciously accepted his gift and began to read.

As I read, I looked for the big “a-ha” moment, actually thinking that this book could really open up my eyes to some of the problems I am facing, or soon might face. After about 100 pages, it was a recurring theme of the same issue:  college loans.

It is safe to say that I stopped reading. I didn’t need to spend another 200 pages learning about something I already knew… that today’s youth are weighed down by the enormous weight and struggle of paying off loans.

Back in the day when my parents were young and in their early 20s, they were already married and living in their own apartment, saving for their first house. My mother didn’t go to college right away, but worked full-time at ABC as the executive secretary for the president.  She took advantage of the tuition reimbursement benefit, and although it took much longer to complete her bachelors degree, she did so at her company’s expense. My father went to college, and became an accountant. Their lives were joined by the sacrament of marriage and the stability of their situations.

Now? Fast-forward about 40 years later, and early 20-somethings are still in college. Not only that, but the institutions we are attending cost more than owning a house, or purchasing several cars. I go from making $8.10 an hour at a woman’s clothing store my senior year of high school, to now paying $28,000 a year for school (tuition alone). And that out-of-state price is one of the lowest!

The pennies I made schmoozing women eight hours a day to purchase the new Franco Sarto pumps didn’t even pay for my first week of food freshman year.

No wonder we poorly-funded students can’t get ahead. We go from maybe $50 or $60 in debt to $120,000 in debt within four years. One would think that when you get a full-time job, you can start shoveling out of this money pit. One would think!

Then there is the beauty of interest on loans that you have to worry about. Not only did you have to panic after graduating that you might not find a job right away to pay off your incredible debt, but now you have time against you with interest. Enter interest!

Ah interest! You are the pimple on my face, you are the thorn in my toe, you are the Darth Vader to my Luke Skywalker, you are NOT my friend. My institution now went from costing $28,000 a year to costing $48,000 a year with all of the beautiful interest that piles up.

Makes sense that young people can’t start a family, because they don’t have any money to even support themselves, let alone a family of four.

I am fortunate because my family helped pay for my college bills throughout the four years of cramming for exams and multiple unpaid internships. That helped out exponentially. But I still have that Stafford loan weighing me down preventing me from beginning the life my parents had so many ions ago.