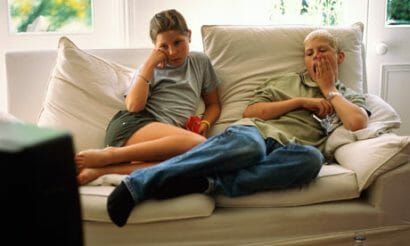 Sleeping isn’t considered a huge calorie burner (you’re not exactly working up a sweat in your sleep), but you might be surprised to learn that the average 150 pound woman burns about 63 calories an hour sleeping – more if you have greater muscle mass (another reason to get in the gym!). During sleep the body is using energy to restore and repair itself, unlike when you’re sitting watching TV. Turning down the thermostat and not drinking alcohol before bedtime will increase the calorie burn even more. Watching TV on the other hand, burns about half that – not to mention increases your appetite!

This doesn’t mean you should choose to sleep every time you want to plop down in front of the television, but you do want to be mindful of how unproductive (and unhealthy) TV-watching is! Instead of just laying on the couch for hours, get up during commercial breaks and exercise – whether it’s sit-ups and lunges or jumping rope. Or, invest in a treadmill and walk while you watch TV. If that’s too much to ask, at least fast-forward through commercial breaks: a huge percentage of ads are for food (junk food in particular), and whether you realize it or not, they do have an affect on you!

More:
Does Your Child Watch Too Much TV? It could be doing more harm than you think