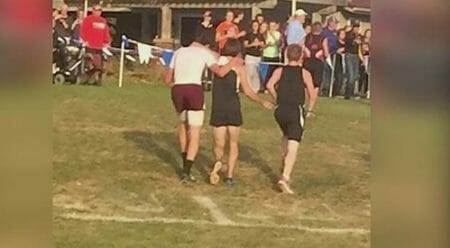 (PCM) A high school runner by the name of Zach Hougland came in first place during a cross country race in Des Moines, Iowa, but was later disqualified from the competition all because he showed some good sportsmanship and went back to assist a fellow runner who was struggling.

Competitor Garrett Hinson was suffering from severe dehydration during the race, so when Houghland noticed that no one else was coming to Hinson’s aid, he turned back and helped Hinson cross the finish line.

Definitely a heartwarming gesture, however it backfired when Hougland was notified that he had lost his first place medal. The rules of the Iowa High School Athletic Association a competitor is immediately disqualified for giving or receiving help, so therefore both Hougland and Hinson were both disqualified from the race.

A representative for the Iowa High School Athletic Association claims that his hands are tied due to the rules, however he does commend Hougland for his good sportsmanship. Hougland’s team did score high enough in the competition to allow him to compete at the state meet later this month and Houghland says despite losing his medal he would not do anything differently and would still come to the aid of a person in need.