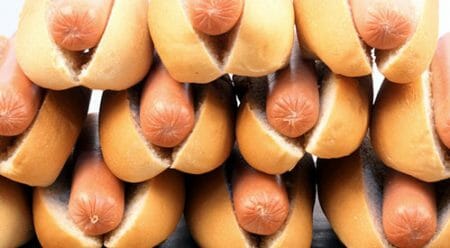 (PCM) A food analytic company called Clear Food has released the findings of their recent testing on a variety of different hot dog brands and have discovered some pretty stomach-turning information as a result. The company looked at 345 hot dog samples from 75 different hot dog and sausage brands and surprisingly discovered that 21 of those labeled vegetarian had the most issues.

They discovered that 10% of the hot dogs labeled vegetarian actually contained meat and a large portion contained human genetic matter or DNA! Human DNA was found in 2% of the hot dog samples overall, but in two-thirds of vegetarian samples. Yuck! This is definitely making us rethink our summer BBQ choices! Clear Food claimed that over 14% of all the hot dogs tested were problematic in some way to our overall health and well-being.

The company also discovered some gross inaccuracies on the hot dogs nutritional labels, such as the inclusion of meats such as chicken and lamb being found in some samples. Clear Foods did not reveal which brands of hot dogs scored the lowest during the testing process however they did provide some well-known brands with a Clear score which is a “representation of how closely a product’s label claims match its actual molecular contents.”

The brands with the highest Clear scores were Butterball, McCormick, Gardein, Eckrich and Hebrew National, however this report still makes us want to rethink consuming hot dogs all together!