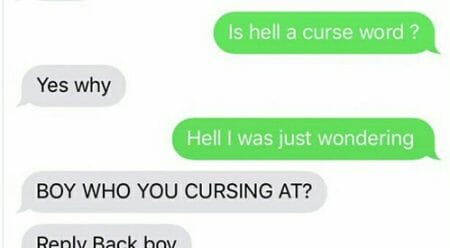 (PCM) We are beginning to feel like every month there is some sort of new challenge that is sweeping the internet, especially on social media and of course teens are the first ones to jump on the bandwagon. Some of these challenges are just plain funny for example the Mannequin Challenge, while others such as the “Salt and Ice Challenge” can be dangerous and pose serious risk for injury.

The newest internet challenge is the “Hell Challenge” and it is driving parents absolutely insane. The “Hell Challenge” poses no real danger, other than angering adults and the results have actually been rather humorous for once. The rules of the “Hell Challenge” are simple. All you have to do is ask your parents if the word “hell” is a cuss word and the continue to use the word as the conversation continues. Teens are then posting the results online, either as screenshots of text messages or as short video clips. That’s really all there is to it!

The results have been a mixed bag of parents taking it well and others becoming, well, let’s just say annoyed! Here are a few examples below:

I tried y’all but you know my dad’s a clown😂😂 #hellchallenge pic.twitter.com/DmzfvQU4s4

She got up at the end and I got up and ran✌🏽 #hellchallenge pic.twitter.com/Gzd0t4bKqd