Breast-feeding Mother Told No Food Or Drink In The Pool 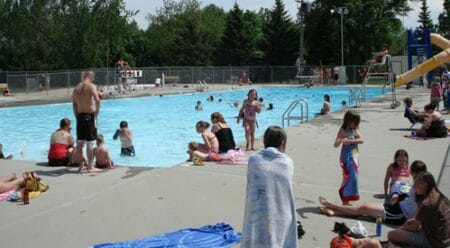 (PCM) 26-year old new mother Cindy Herrine was recently approached by management at a local swimming pool in Round Rock, Texas and was told she needed to stop breast-feeding her baby after someone made a complaint.

Herrine was at the pool swimming with her 20-month old son Blaze when he got hungry. Herrine says that at times it makes her son more calm and happy to nurse while they are in the water. When approached by the pool management, Herrine let them know that it was her legal right to breast-feed anywhere she was allowed to be. She even went as far as to pull up the Texas statute on the situation and show it to the pool manager. The woman who had initially made the complaint even came up to apologize to Herrine.

However, the trouble started once again when Herrine got back in the pool and began feeding Blaze once again. The pool manager came over and informed Herrine that he had checked with the local police and they said that the pool was allowed to ask Herrine to stop breast-feeding citing that there is to be “no food or drink allowed in the pool”.

Herrine then exited the pool and contacted the local authorities to file a complaint against the pool, however when the authorities arrived Herrine was told she couldn’t file a harassment charge because the incident did not fit in with any type of crime.

Frustrated, Herrine returned home and was happy when she received a phone call from Rick Atkins, the city’s Parks and Recreation Director. He informed Herrine that breast-feeding was indeed allowed in the swimming pool and apologized to her for the entire incident. He claimed that the pool employees did not know about the Texas law and that they now understand that a mother is free to breast-feed her child anywhere she feels comfortable.