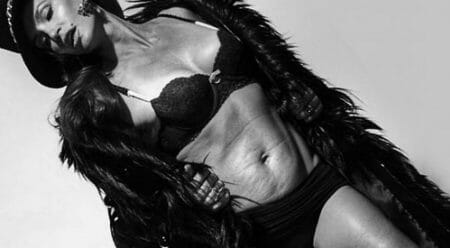 (PCM) As we are sure many of you have heard or seen by now, an un-retouched photograph of model Cindy Crawford was posted on the net creating a frenzy of commentary in regards to body image and aging.

The image in question was posted on Twitter by British journalist Charlene White and it featured Crawford posed in black lingerie, however visible cellulite, wrinkles and sun damage can also be seen in the image. You can see a lot of skin imperfections. However, it was White’s point to try to applaud Crawford for going photoshop free!  The tweet can be seen below:

When the photo made the social media rounds many people commended White for sharing the image and were also praising Crawford for having the courage to open herself up to public scrutiny.

White was under the impression that the photo was leaked from a Marie Claire magazine photo shoot and while this is half true it was for Marie Claire Mexico and Latin America which is run by a different publisher than Marie Claire in the States.  It was an unpublished outtake from a 2013 photo shoot and it was shared without Crawford’s knowledge or permission.

Crawford has yet to publicly comment on the photo, however in light of this new information many are beginning to question White’s motives in publishing the image in the first place. Many feel that she is doing just the opposite of what she intended by objectifying Crawford’s body via social media to make a point about body image standards.

White still stands behind her posting of the image and told Good Morning America that she felt it was empowering to see someone as beautiful and iconic as Cindy Crawford in her natural form.

What do you think? Should White have shared the image?