(PCM) Cosmopolitan magazine is facing a bit of criticism after they appeared to use the story of a woman’s weight gain/loss after a cancer diagnosis as clickbait on their Twitter feed. It was not that the magazine wrote a bad story, it was more of an example of poor phrasing used by Cosmos’ social media team when promoting the feature. The story overall was about how a woman named Simone Harbinson from Melbourne, Australia, was diagnosed with a rare and malignant form of cancer of the appendix and it caused her to both gain and then lose weight.

When Cosmo posted about the article on Twitter their tweet read, “How This Woman Lost 44 Pound Without *ANY* Exercise”, it then featured a link to the article and a picture of Harbinson. Everyone is up in arms because happily Harbinsons’ cancer surgery was a success, however she gained 35 pounds in the process. She then went on to lose the excess weight by simply going on a diet. You can see that Cosmos’ tweet was only worded that way to get attention and a horrific disease like cancer should never be looked as a successful weight loss or gain solution. It is a very disrespectful headline to Harbinson and all others who have battled cancer or are currently battling the disease. 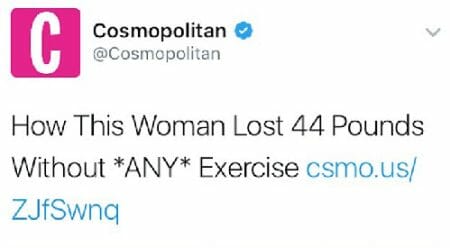 The article does explain how Harbinson lost the excess weight without going to the gym, but there is definitely a bit more to the story. She goes into great detail about her cancer diagnosis, recovery and steps she needed to follow to lose weight. The headline makes the story appear that the cancer was the solution to Harbinson’s weight gain, but it was really the source. Cosmo received a ton of negative backlash online and have since removed the offensive tweet and replaced it with a better headline for the story. The new tweet reads, “A Serious Health Scare Helped Me Love My Body More Than Ever.”