Ever Wonder Where S’Mores Originated? 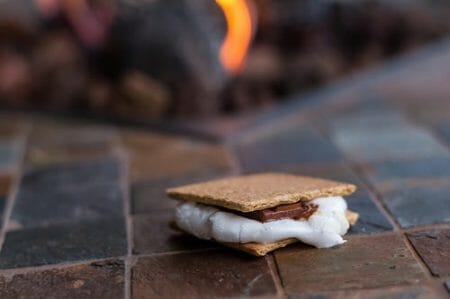 (PCM) Once the weather starts to get chilly we begin to think about warm and delicious treats that can satisfy our sweet tooth on those cold winter nights. The first treat to come to mind is a warm and gooey s’more. No bonfire or camping expedition is complete without someone breaking out the chocolate bars, graham crackers and marshmallows to create a batch of s’mores. But, just where did s’mores come from and why are they even called s’mores?

There is some debate of the exact origin of the s’more, however one of the earliest recipes for the dessert was published in a book of recipes from the Campfire Marshmallow company back in the 1920’s, however it was called a “Graham Cracker Sandwich”.  They were very popular among the Girl Scouts and Boy Scouts on their camping trips, so technically the credit for s’mores as we know them today is given to a woman by the name of Loretta Scott Crew, who made them for the Girl Scouts.

There was a recipe titled “Some More” in the 1927 publication called Tramping and Trailing with the Girl Scouts, this is perhaps how they ended up referring to them as s’mores, since that would be an abbreviated version of “Some More”. Since they are so delicious, the name also more than likely came from children continuing to ask for “some more”. Makes sense if you think about it!

S’mores are without a doubt one of the easiest dessert recipes to make. All you need are chocolate bars, marshmallows and graham cracker, along with some sort of heat source, usually a campfire. Don’t worry if you don’t have access to a campfire, because the great thing about s’mores is that they can also be made from the comfort of your kitchen at home. There are many different varieties of s’mores, however the most common is just the simple chocolate, graham cracker and marshmallow variety.

Most people prefer to make s’mores over the campfire, however you can also make them at the stove top or in the microwave at home. They are very easy recipe for children to make, but because of the open flame and heat aspects they should not be made by children alone without adult supervision.

Below are a few traditional and non-traditional s’mores recipes to try out and let us know you think!

Unwrap chocolate bar. Break bar into smaller pieces as indicated by manufacturer’s indentations in the surface of the chocolate. Cover one of the graham cracker halves with chocolate pieces to fit your graham cracker.

Put a marshmallow (or two) on the stick and hold it over the fire until roasted. Toast marshmallows over a campfire, turning the stick until the outside of the marshmallow is golden brown and just starting to get mushy. NOTE: Some people like to roast them for a few minutes, then make them catch on fire, blow them out, and then the marshmallows are done to their liking. Your choice on how you like your marshmallows!

When the S’more is fully assembled, let it sit for a few seconds. The heat will somewhat melt the chocolate and you will not burn your mouth! Now squish the S’more between your fingers and eat it.

Pre-heat oven to broil (high heat) with baking rack 5 inches down from the top of the oven. Line a cookie sheet with parchment paper or aluminum foil.

Place graham crackers side by side in rows without any gaps on prepared cookie sheet.

Spread mini-marshmallows evenly across the graham crackers that will be used for the bottoms. Top each one with chocolate chips.

Place the cookie sheet in the oven with the door slightly cracked. Broil for approximately 5 to 10 minutes, carefully watching them so they don’t burn. When the marshmallows have turned a golden brown on the edges, remove the cookie sheet from the oven.

Place the remaining graham crackers on top of the broiled s’mores; press each one down gently. Allow them to cool for a few minutes and serve.

Take one (1) large graham cracker and break it in half (one for top cracker and one for bottom cracker). Place one graham part on and plate and top it with a large marshmallow. Put in the microwave on High for 10 to 12 seconds or under the marshmallow doubles in size; remove the plate from the microwave.

Top the hot marshmallow with a square of chocolate and then with the remaining graham cracker part. Squeeze down until the marshmallow begins to puff out of the sides of the s’more.

Spread both sides of each Oreo cookie with peanut butter; place over half of the halved graham crackers. Top with chocolate.
Using a long metal skewer or long-handled fork, toast marshmallows 6 in. from medium-hot heat until golden brown, turning occasionally. Place on chocolate; cover with remaining graham crackers. Serve immediately.