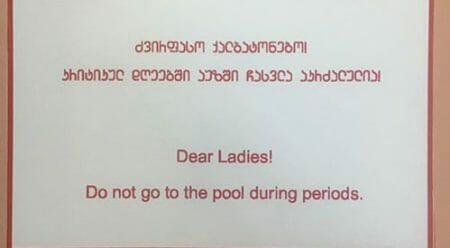 (PCM) An upscale fitness center in the country of Georgia (not the U.S. State) is stirring up quite a bit of controversy after posting signs around their center informing women that if they are on their period they are not allowed to swim in the facilities pool. Members of the fitness center are outraged and the center has been receiving quite a bit of backlash from social media users after one guest posted a image of one of the signs online.

The Vake Swimming Pool and Fitness Club has several notices posted up around the building that read “Dear ladies! Do not go in the pool during periods.”  No further explanation was provided on the notices. We are guessing that this club has never heard of a tampon, seriously, how would they even be able to tell if a female guest was menstruating or not?

Female guests of the center are deeply offended by the notices and some are even demanding that they should receive a discount since they will be unable to make use of the facility for five to six days per month. Why should they pay the same price as men, who apparently, are free to use the facility each and every day of the month.

When commenting on the issue, the Vake Swimming Pool and Fitness Center stands by their decision to post the notices as they claim they only added the new rule as a “preventative measure” after their pool was “contaminated” with menstrual blood. This has led to quite a large debate online with some people taking the side of the fitness center and others standing behind the women.

What do you think? Did the fitness center go to far with the notices?