Girlfriends is the New Boyfriend 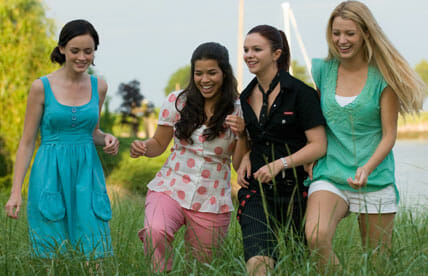 (PCM) “You’re an old maid,” my friend would sometimes say to me.

When I was in college, my boyfriend and I would find enjoyment in staying in some nights to watch a movie.Unheard of right?  Is it a sin to take a break one night from the deafening bar stereos to cuddle up and watch an Arnold flick with a huge box of Whoppers?I always had a boyfriend in college and this was always my situation…getting called “boring” for acting like an “old married couple.”Fast forward two years later and I am in another relationship and I am working hard to avoid those exact same accusations.

But the reality is that all my friends would be in the same situation if they were in a relationship. Instead of D’Jais on a Saturday night, they would opt for a fancy dinner in the city with their beau. They would forego a beer Olympics session to go see the new Ted movie (even if it IS about a talking teddy bear.) They would most likely sacrifice a girl’s night equipped with Cosmos and guy bashing to have dinner with their boyfriend’s family. These are just the things you do when you couple off… you enjoy that private time you get with your significant other.

It is all a balancing act. Spending time with friends AND boyfriend, especially when you go from being that single girl who used to complain with your friends about how hard it is to find a good guy, to becoming one of those girls who found a good guy. You feel almost guilty leaving your friends behind to fend for themseves in the battlefield of singles.

No wonder that when people get older, it becomes more comfortable for married couples to hang out with other married couples. What single person wants to sit there spending his or her time with a happily matched duo? Misery loves company and that’s exactly why girls love having the company of other single girls. Plus, if you are that married couple, you cautiously try not to be too “mushy” in front of your single friends in fear of resentment.

I would know. When I was single and hung out with a couple, it provided me with that wonderfully uncomfortable third wheel situation.  Now that I am in a relationship, I do NOT forget my solo days. I try very hard to make sure I still do happy hours, watch chick flick movies with a glass of wine, and setup dinner dates with my girlfriends.

It is all apart of the transition process. My main relationship is no longer with my girlfriends, but with my boyfriend. What I mean by that is during my 1.5 years of singlehood, my friends were the ones I texted when I wanted to hang out, and I called them before I went to bed.  They went on dinner dates with me and comforted me when I was sad. They provided me that moral support and emotional foundation that my boyfriend now provides.

To make sure my friends know I am always appreciative of those times with them, I make sure to always see them.  Or rather I make sure I am never again that “old maid.”