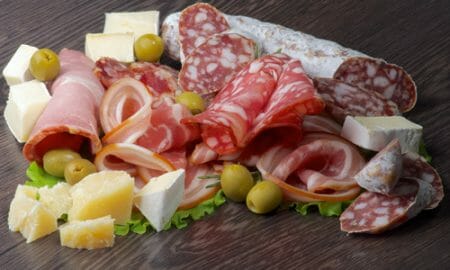 (PCM) As the daughter of a deli manager, National Cold Cuts day (March 3rd) is a holiday that really cuts close to home. Growing up, cold cuts (aka lunch meats or deli meats) weren’t just our bread and butter – they were serious good eats.

“Deli” is short for “delicatessen”, a blended French and German word which, roughly translated, means, “really great food”. Perhaps the most well-known and popular deli foods include cold cuts (precooked or cured meats) such as turkey or chicken, ham, beef, and various kinds of sausage.

Pop culture credits an inventive (or lazy) 18th Century earl with the invention of the sandwich, but cold cuts have probably been around a lot longer as the original leftovers: cold-served cuts from last night’s roast beast.

Some modern cold cuts can be cut-to-order from whole-roasted meats, though pre-packaged (and highly processed) products are also available. Processed meats tend to have a longer shelf-life (several weeks, in some cases, compared to just a few days for the freshest stuff), but they are also generally higher in fat, salt, nitrates, and additives. High consumption of processed meats has been linked to health issues such as cancer and heart disease, so if these deli favorites are more than just a once-in-a-while delicacy for you and yours, you may want to opt for fresh-sliced varieties (particularly whole-roasted chicken or turkey) without added flavors. Health experts also recommended limiting deli meats to just a few slices per meal; you can bulk up on other fixings such as lettuce, onions, peppers, spices, pickles, relishes and chutneys, mustards and other heart-healthy spreads on whole grain breads.

There are many regional variations on the cold cut sandwich, from the Philadelphia hoagie, the New York hero, or the New England Grinder, to name a few. Some say the Submarine (sub) sandwich was first marketes right here in Delaware. While that claim that may never be verified, the Bobbie (voted the “Greatest Sandwich in America”) was originated by Delaware’s-own Capriotti’s Sandwich Shop. The Bobbie features fresh-roasted pulled turkey, cranberry sauce, stuffing, and mayo. You want one now, don’t you. You’re welcome –and happy National Cold Cuts day.

This entry was posted in Food & Recipes, Health & Fitness, I Love Food!, Lifestyle