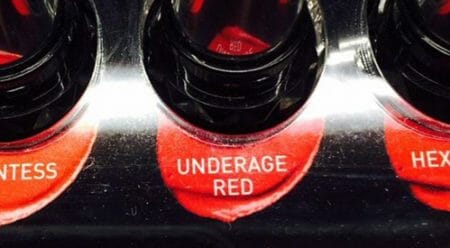 (PCM) Beauty retailer Sephora announced that they would be removing a shade of lipstick titled “Underage Red”, part of Kat Von D’s exclusive collection, from their stores after its’ name stirred up quite a bit of controversy online.

The lipstick, which is bold red in color, has been part of Kat Von D’s Seophora collection and available in stores for over a year now, but it only takes one person to become offended to start the chain reaction of online critiques of the name, Kat Von D and Sephora as well.

However, Kat Von D is standing behind the lipstick’s name and is refusing to apologize. She posted the following on her Facebook page to address the controversy:

Post by Kat Von D.
She says that she finds the comments by others to be both “inaccurate and appalling” and will not apologize nor pull the lipstick from her collection, despite Sephora’s decision to stop selling it in their stores.
This is not the first time that Kat Von D’s shade names for her make-up collection drew in criticism, as back in 2012, she had a shade named Celebutard that created a bit of a backlash.

This entry was posted in Beauty, Celebrity, Debatable, Lifestyle, News