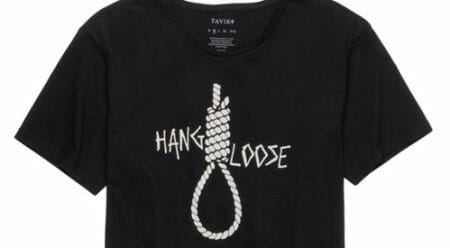 (PCM) How this particular t-shirt even made it on the racks in the first place is beyond our comprehension, but sure enough, T.J. Maxx was selling a t-shirt that featured a picture of a noose along with the phrase “Hang Loose”.

T.J. Maxx has now pulled the offensive shirt from their racks after a customer posted an image of the shirt on social media and it created a firestorm of negative comments toward the company. Tavik, the company that manufactured the shirt in question are a beachwear company, hence the surfing terminology “Hang Loose”, but to throw in an image of a noose on the shirt, they are just asking for trouble.

Many feel that the shirt is in some ways glorifying the horrific acts of both lynching and suicide. A PR rep for Tavik released a statement saying that the company now regrets the design and they sincerely apologize to anyone who may have been offended. The statement goes on to say that the item was released without going through proper protocols and is not related to anything other than surfing.

T.J. Maxx also issued an apology statement out to customers and claim that they mistakenly bought a few hundred units of the product and that their product review process somehow overlooked the item. According to CNN.com, there have also been steps put in place to be sure that the item is not sold elsewhere, as Tavik claims that all remaining units of that particular shirt design have been destroyed.