Starbucks Urges Employees To Talk About Race Relations With Customers 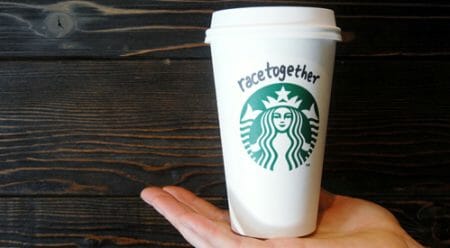 (PCM) Retail coffee giant Starbucks is now asking customers to #RaceTogether and urges  their employees to begin talking about race relations in our country with their customers. The baristas have begun writing “race together” on beverage cups in hopes of sparking some of these conversations that many people are afraid to have with one another.

Starbucks CEO Howard Schultz claims that “We as Starbucks should be willing to talk about this issues in America”. After incidents that occurred in Ferguson, MO, New York City, and Oakland, CA, there is a lot of deep emotional and racial unrest throughout the country and these are issues that we should not be afraid to address.  Schultz goes on to say “Not to point fingers or to place blame, and not because we have the answers, but because staying silent is not who we are,”

It is the hope that this new movement will be the catalyst to help people gain a greater empathy, understanding and compassion towards one another.  Stores in New York, Chicago, St. Louis, Oakland and Los Angeles have already begin writing “Race Together” on cups, but the rest of the company’s some 12,000 stores are expected to join in with them today.

Schultz feels it begins with “one conversation at a time” to create a more emphatic and inclusive society overall.  While it appears that Starbucks may have had good intentions with the #RaceTogether campaign, it is causing the company to receive quite a bit of ridicule online and on social media, as many feel that it potentially puts customers in an awkward position and could lead to racial stereotyping, just the opposite of what it was initially proposed to do.

Check out Twitter and the #RaceTogether for some pretty hilarious quips aimed at the company. Starbucks still continues to stand by the movement and feels that it is truly worth a little bit of discomfort for the great good.

What do you think?