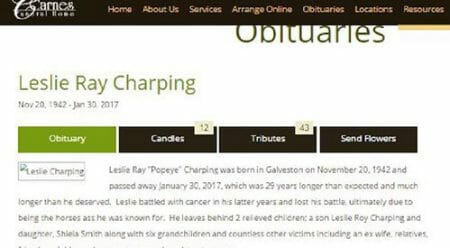 (PCM) The obituary penned for Mr. Leslie Ray Charping is receiving quite a bit of attention, but not for the heartfelt or sappy reasons you would imagine. In fact, Charpings obituary is not even one of the more humorous ones that loved ones often create when their relative passes away. Charpings is downright brutal and nasty and it is clear that his family feels little to no remorse in regards to his passing.

Charping died in Galveston, Texas and the following obituary was posted on the Carnes Funeral Home website. It quickly went viral, so much so, that the funeral home website crashed several times throughout the afternoon.

Leslie Ray “Popeye” Charping was born in Galveston on November 20, 1942 and passed away January 30, 2017, which was 29 years longer than expected and much longer than he deserved. Leslie battled with cancer in his latter years and lost his battle, ultimately due to being the horses ass he was known for. He leaves behind 2 relieved children; a son Leslie Roy Charping and daughter, Shiela Smith along with six grandchildren and countless other victims including an ex wife, relatives, friends, neighbors, doctors, nurses and random strangers. At a young age. Leslie quickly became a model example of bad parenting combined with mental illness and a complete commitment to drinking, drugs, womanizing and being generally offensive. Leslie enlisted to serve in the Navy, but not so much in a brave & patriotic way but more as part of a plea deal to escape sentencing on criminal charges. While enlisted, Leslie was the Navy boxing champion and went on to sufficiently embarrass his family and country by spending the remainder of his service in the Balboa Mental Health Hospital receiving much needed mental healthcare services. Leslie was surprisingly intelligent, however he lacked ambition and motivation to do anything more than being reckless, wasteful, squandering the family savings and fantasizing about get rich quick schemes. Leslie’s hobbies included being abusive to his family, expediting trips to heaven for the beloved family pets and fishing, which he was less skilled with than the previously mentioned. Leslie’s life served no other obvious purpose, he did not contribute to society or serve his community and he possessed no redeeming qualities besides quid witted sarcasm which was amusing during his sober days. With Leslie’s passing he will be missed only for what he rimer did; being a loving husband, father and good friend. No services will be held, there will be no prayers for eternal peace and no apologies to the family he tortured. Leslie’s remains will be cremated and kept in the barn until “Ray”, the family donkey’s wood shavings run out. Leslie’s passing proves that evil does in fact die and hopefully marks a time of healing and safety for all.

As the obituary continues to circulate online several news organizations began to dig a bit deeper to see if the children’s accusations about their father held any water. They were able to dig up Charpings police record and majority line-ups with what his children posted. There has been mixed reaction to the obituary online, as some feel that his children went too far by airing all of their family’s “dirty laundry” out of the world to see, while others praised them for being brave and finally getting the type of release they may have needed after years of abuse and neglect.

I wrote my father’s obituary. I loved my father because he was my father and his passing would not have been any less difficult had he been a good father. As someone that ‘hated a liar’, I believe even he would have appreciated the honesty. I apologize to anyone that my father hurt and I felt it would have been offensive to portray him as anything other than who he was. This obituary was intended to help bring closure because not talking about domestic violence doesn’t make it go away!

Thank you to those that have offered sincere condolences, understanding and prayers for our family, your words bring comfort. I am happy for those that simply do not understand, this means you had good parent(s) — please treasure what you have.

Although I appreciate everyone’s concern, it would have been much more appreciated at any time during my childhood. For those being cruel, please remember that you now resemble my father and I would be more than happy to pen your obituary as well.

This entry was posted in Debatable, Lifestyle, News, RIP