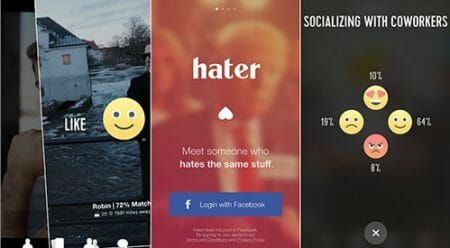 (PCM) Forget the hearts and flowers when trying to get a date for Valentine’s Day, instead try bonding over things you mutually hate!  There is a new dating app on the way called “Hater” and rather than matching up users with their mutual loves, it instead matches users with things they mutually hate.

The app has users fill out a profile sharing their opinions about several topics and situations they find annoying ranging from politics and restaurant tipping to people who walk slowly or take too many selfies. It then matches you with someone who shares your mutual hatred for such things, therefore, at least in “Haters” opinion, creating a perfect match. You simply swipe down to hate, up to love, left to dislike or right to like.

The app was created by Brendan Alper who quit his job at Goldman Sachs to become a full-time comedian. He initially came up with the idea for the “Hater” app as a joke, but it seems to have spawned a ton of interest in the idea and decided it actually would be a genius idea for a dating app. It’s the idea of forgetting the warm and fuzzy and getting down and dirty right away.

The “Hater” app will officially launch on February 8th and is available in beta now for iOS, which times it perfectly for the upcoming Valentine’s Day holiday.  The Android version will be available later this spring. So be sure to spread the love …opps we mean hate!