Do Babies Fake Cry For Attention? 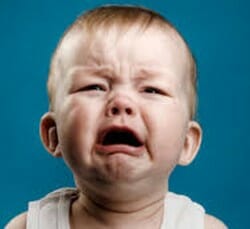 (PCM) Babies cry to alert their parents when they are uncomfortable, hungry, or in distress, however it has often been speculated that babies will sometimes actually fake cry to get attention.

Researchers in Japan have put that theory to the test and studied two babies crying over a six month time period and have discovered that often times the babies are capable of turning on the water-works just to get their parents attention.

The researchers paid specific attention to the presence of emotion in the babies facial features to see if they revealed that the baby was actually upset. Those features could have been a grimace, looking sad, or making uncomfortable noises. While the babies would indeed cry during instances of distressed the researchers also took note that the babies would also cry only moments after laughing and playing with no instance of distress at all. This led them to the theory that the babies will indeed cry to get the attention of their caregivers. The research even went on to show that the baby would continue to cry until the mother got closer and then would just as quickly laugh and smile.

One of the researchers claims “fake crying successfully attracts the attention of a parent and contributes ‘greatly’ to an infant’s social development as well as their emotional development. Infants who are capable of fake crying might communicate successfully with their caregivers in this way on a daily basis. Fake crying could add much to their relationships”

It is interesting to note during the study that of the two babies, one was an only child and the other had siblings. The only child, most of the time only cried during times of distress but the baby with other siblings often cried to get attention from parents. This is most likely due to feeling the need to compete with the other siblings for the parents undivided attention, which an only child would have no issue.

The study definitely sheds some new insight into a baby’s behavior pattern and most likely does have some kind of effect on their communication skills later in life.

This entry was posted in Baby, News