Locks on the Seine: Love or Litter? 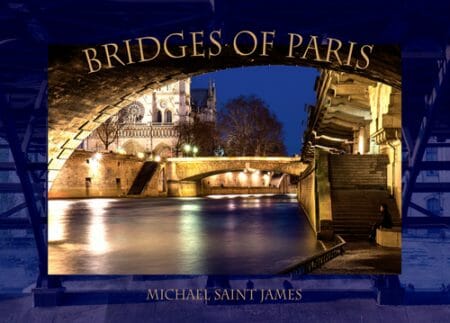 Love in Paris, the city of love: two sweethearts on a bridge over the Seine. They write their names on a padlock. They hook it to an available spot in the bridge’s wire-mesh parapet, the railing that runs along its edges, and fasten the lock, securing it— and, they hope, their love—forever. They throw the key in the river.

While spending months photographing the bridges on the Seine for my new book, Bridges of Paris, I frequently witnessed this ritual. I was helplessly charmed every time. After the key is tossed in the Seine, most lovers kiss, hug, and linger at what has now become their favorite spot in the city. Many photographs are taken. One couple even had a video camera on a tripod documenting them taking their selfies.

The lovers wander off, holding each other, slightly punch-drunk and staggering, to their next destination, perhaps their hotel room or a bar. Their lock will surely persist for all time. Or at least until the fence, under the weight of hundreds of heavy locks, rips free of the bridge and tumbles into the Seine.

Railings were originally put on the bridges to prevent children from falling into the river. Now the danger comes more from the risk of a lock-heavy fence falling onto a boat full of tourists.

“I heard one of Paris’s bridges collapsed!” a friend emailed me from the States in June 2014. When I arrived on the bridge, the Pont des Arts, I found only one small section of the chain-link railing, filled with locks, hanging over the Seine. It didn’t fall entirely but hung there until city workers removed it. Plywood had been put up to cover the gap. The bridge’s integrity was never in question.

When the Pont des Arts’ railing collapsed, however, Parisians lost their tolerance. The love-lock ritual may fuel the French capital’s reputation as the “City of Love,” but not everyone finds it charming.

Love locks arrived in Paris in 2008. Today, an array of locks—antique locks, bike locks, chain locks, handcuffs, and other tokens of devotion are attached to bridge railings, lamps, sculptures, signs, grates—anything that can be fastened upon. Some couples have planned ahead and arrive in Paris with a personally-engraved lock. A few choose combination locks, which certainly have their advantages.

The Pont des Arts was the city’s first love-lock bridge. When the municipal government cleared the locks off the bridge in 2010, the tradition continued on the Pont de l’Archevêché (Archbishop’s Bridge), with its romantic view of Notre Dame. Both bridges were targeted because it is easy to fasten locks around their chain-link railings. Once these bridges were choked with padlocks, the ritual went viral and spread to other bridges.

On my visits to Paris, beginning in 2010, and then during my year-long photographic sabbatical there in 2014, I watched the lovers’ ritual display an increasingly dark side. Bridges that were once artfully cluttered had turned into sickening masses of tumorous metal.

The advent of love locks is part mystery, part cultural phenomenon. One catalyst was Italian author Federico Moccia’s teen novel, Tengo ganas de ti (I Want You), published in 2006. Two young Roman lovers immortalized their bond by securing a lock inscribed with their names to the Ponte Milvio, the oldest bridge in the Eternal City. They then threw the key into the Tiber.

But the tradition pre-dates I Want You. A tale from the First World War tells the story of Nada, a young schoolteacher in the Serbian spa town of Vrnjačka Banja. Her soldier sweetheart leaves for the front and, having arrived in Greece, falls for a local woman. Nada dies of a broken heart.

Young women in the spa town, fearing a similar fate, began fastening locks with their and their lover’s names on the city’s Most Ljubavi (“Bridge of Love”), where Nada and her fickle boyfriend used to meet. Decades later, the tale was popularized by Desanka Maksimovic’s poem, “Prayer for Love.” Today, the Most Ljubavi swarms with as many love locks as any of the Paris bridges.

Padlocks themselves have been used for thousands of years both in Egypt and China. Love-locks on the Great Wall of China, in Taiwan, and in South Korea continue a supposedly ancient tradition.

Meanwhile, love locks have sprouted all over the world, including London, Budapest, the Brooklyn Bridge, and the Charles Bridge in Prague. Love-lock “trees” now provide an alternative on the Luzhkov Bridge in Moscow and the North Seoul Tower in South Korea. Websites offer metal trees and lock-dispensing vending machines to make things more convenient.

The tradition also spread to the wild-west mining town of Lovelock, Nevada, named for Welshman George Lovelock, who founded it in 1868. In Lovers Lock Plaza, behind the town Court House, couples can attach their love locks to an “endless chain.” The “tradition” began on Valentine’s Day, 2006, the same year the Italian teen novel was published.

Trash or treasure? In Paris, the locks are now considered “visual pollution,” a blight on the city’s architectural history. The heavy metal locks not only weigh down the bridges but damage their railings, lampposts, and sculptures. Tossed keys litter and pollute the river.

There is also a symbolic risk here, one perhaps more at the heart of Parisians’ objections. Love, like life, is a transient experience, always flowing, always changing.

“Love flows like the Seine through Paris, it can never be locked.” one local told me. But fear of change and anxiety over life’s impermanence create the urge to try to create stability and lock things down.

Contemporary French philosopher Alain Badiou has written that love implies constant risk. Love is happily-ever-after only in fairy tales. Believing that a commodity such as a metal lock can secure two people’s love forever is a possibly dangerous fantasy. A lock is far from a perfect symbol of love, which is not a prison or possession. True lovers protect each other’s freedom.

According to tradition, as long as the lock remains fastened, love will endure. This may be bad news for all those who have locked their love to the bridges over the Seine. Except perhaps, for those who wisely chose a combination lock.

Paris has now launched a “No Love Locks” media campaign. As new love often replaces old, lock-filled grates are being replaced with lock-proof clear acrylic panels. A grassroots “No Love Locks” movement was started, unsurprisingly, by two American women who now reside in the city. Although many love-struck tourists are still resisting such restraints on the expression of their affection, the tide is turning.

The love-lock fad will fade away as surely as love will always triumph in Paris. The beautiful crossings over the Seine will regain their classic architectural beauty. Lovers will always meet on Parisian bridges, hold hands, kiss, and gaze into each other’s eyes. They will always make commitments beyond their understanding, just as the waters beneath continue to flow ever onward.

When the time comes, I’ll go back to take photographs for the second edition of my book: Bridges of Paris Sans Serrures (“Without Locks”).

Michael Saint James’ artistic pursuits include award-winning book design, film editing, and sound recording, as well as his first love, photography. Saint James is a world traveler, having visited more than 50 countries – doing everything from photographing penguins in Antarctica to trekking the Himalayas. As an educator with California teaching credentials, he has taught media production and technology arts as well as photography, art history and visual storytelling. He is an expert speaker on Impressionist and Post-Impressionist art. Indeed, he walked in Vincent Van Gogh’s footsteps through the Netherlands, Belgium, and France in order to immerse himself in that troubled master’s vision. The father of two grown children, Saint James once owned a café in Berkeley, California. He has bicycled from Las Vegas to Washington, D.C. and is rumored to play a mean blues harmonica.

The Bridges of Paris is now available in hard copy from Citron Bay Press, Amazon.com and select independent retailers.