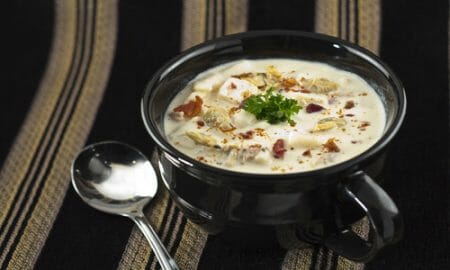 (PCM) Chicken noodle may top the list of America’s favorite soups, but one of our most iconic dishes has to be New England Clam Chowder. Steeped in national history and tradition, this creamy seafood soup-stew definitely deserves a nod for National Soup Month – it even has its own (unofficial) National holiday. Wicked cool!

Seafood chowders have been an American staple since colonial times; as clams were plentiful along the coastal regions of the North East, they were a natural addition to this rich and filling “poor man’s food”. Chowders were often supplemented with salt pork and hardtack (ship biscuits), other ingredients New Englanders had ready at hand.

One thing that New England Chowder does not have is tomato. That would be Manhattan Clam Chowder you’re thinking of; different state, different holiday.