The Evolution Of The Modern Day Bra 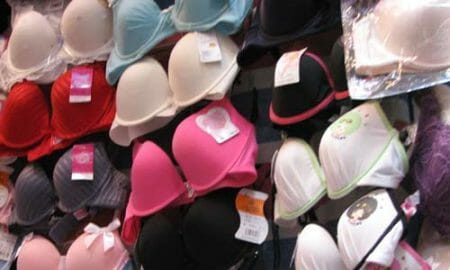 (PCM) The bra. Love it or hate it, it is a piece of clothing that is owned by nearly every woman both young and old. Studies revealed that the average woman will spend upwards of $4,000 dollars on bras throughout her lifetime and own approximately 16 to 20 bras at any given time.

Over the years the bra has taken on many style changes and updates since they were first created. The origins of the modern day bra, as we know it today, dates back to the early Egyptian era when women went bare-breasted under flowing tunic-like dresses, it wasn’t until the days of the early Roman empire when young women wore breast bands called fascia to prevent any sagging in their breasts as they got older.

These breast bands were pretty much the norm until the 16th century when corsets were first introduced as a way for high society women to bind their waists to be as tiny as possible and push their breasts up and out. Since that time the days of sagging breasts were over, however it was not until 1866 when the first modern look bra appeared in Great Britain, which was crafted from wire and silk.

There was another breakthrough in 1869 when a French woman named Herminie Cadolle made the decision to cut a corset into two separate pieces and the top part was used strictly for breast support. This was also the birth of the term “brassiere” to represent the new clothing piece. The first U.S. patent for the creation of a bra did not occur until 1893 when Marie Tucek created a design that featured one pocket for each breast that was mounted on a metal plate supported by shoulder straps. It was basically the initial design for the underwire bra that we all know and love (not really!).

In 1910, the first backless style brassiere was invented by 19-year old socialite Mary Phelps Jacobs. She used handkerchiefs and silk ties to create a new undergarment that was less clunky then her stiff and restricting whale-bone corset.

The flapper era of the 1920’s saw the demand for women to appear more flat-chested and boyish looking, so at that time the bandeau style of brassiere was invented and favored at the time. However, it would soon receive competition from seamstress Ida Rosenthal, her husband William and dressmaker Enid Bisset when they formed their company Maidenform. The Maidenform design featured a fit and shape that adhered to a woman’s natural curves and was used to enhance rather than flatten a woman’s assets.

It was not until 1930 that the term “brassiere” was shorted to the simple “bra” and in 1932 various cup sizes A, B, C, and D were introduced giving women various sizing choices. In the era of World War II, women needed breast protection and support and it was at this time that various styles of bras became popular such as the torpedo and bullet bra. The conical bra was made famous by actress Jane Russell back in 1943, well before performer Madonna spear-headed a revival of the style in 1990.

Cone and bullet bras were all the rage in the “Sweater Girl” period of fashion in the 1950’s made popular by Marilyn Monroe and Lana Turner. Women were more than happy to flaunt their assets and give the appearance of bigger cup sizes. Then in 1964 the push-up bra was created by Louise Poirier which was aptly named the “Wonderbra” and sold by a Canadian lingerie company. Then in 1967, the iconic film character Mrs. Robinson left men drooling with her black lace designed bra.

The design for bras remained mostly the same with various materials such as lace, cotton and silk being used in their production. It was in 1977 that the first concept of the sport’s bra was introduced adding to the ever expanding collection of bra concepts and styles.

Fast forward to the early 2000’s and bra designs now include strapless, one strap, memory foam and non-underwire bralette styles. Sizes have also changed dramatically over the years. While most bras are still offered in the standard A, B, C and D cups, they now offering larger sizes such as DD and DDD, as well as E, F, G, H and even L, KK, and N sizes.

In years past the average bra size was a very small 34 B, however that has no expanded to a 36DD being the more popular size. Currently, women are in search of the most minimal and comfortable bra that will fit nicely with low neckline tops and a larger overall breast size.

As much as women love putting on a sexy bra and flaunting their assets, many of us also can’t wait for that moment when we can get home and rip them off as well!

This entry was posted in Beauty, Fashion, Fixed It For You, News