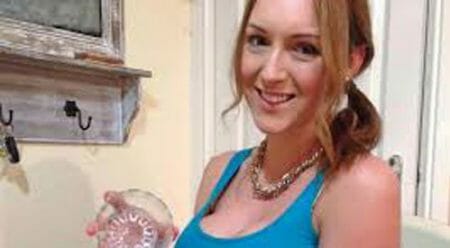 (PCM) Health and fitness blogger, 29-year old Tracy Kiss, has made the bold claim that consuming a “sperm smoothie” each day has some truly amazing heath benefits. She is touting the drink as new miracle health product that is both all natural (of course) and vegan friendly.

It seems that Kiss is also a strong advocate for other benefits of semen other than just in smoothies. She has also sung the praises of the seman facial (and no, it’s not what you are probably picturing right now).  She claims that both the semen facial and sperm smoothie are non-sexual and she has a special donor who is tested for STD’s to be sure she is not putting her body at risk.

We love that she uses the word “harvested” to describe how a friend donates a tub full of semen for both the smoothies and the facials to her home three times a week. That’s definitely one heck of a good friend!

Kiss claims that to make the sperm smoothies she mixes the donated semen with fruit, seeds, and either coconut or almond milk. She also has no issue drinking just the plain semen on it’s own saying that it has properties that ward off the flu. She feels it gives her amazing amounts of energy and boosts her mood as well.

When speaking with Vice about her somewhat odd ingredient choices, Kiss reveals “In relationships, you put fingers in holes, you taste things, and you don’t see it as cringeworthy. But when you take away the passion and say it’s scientific, people don’t like it.”

Doctors are refuting Kiss’s claim saying there are no health benefits associated with consuming semen, but hey, to each their own!